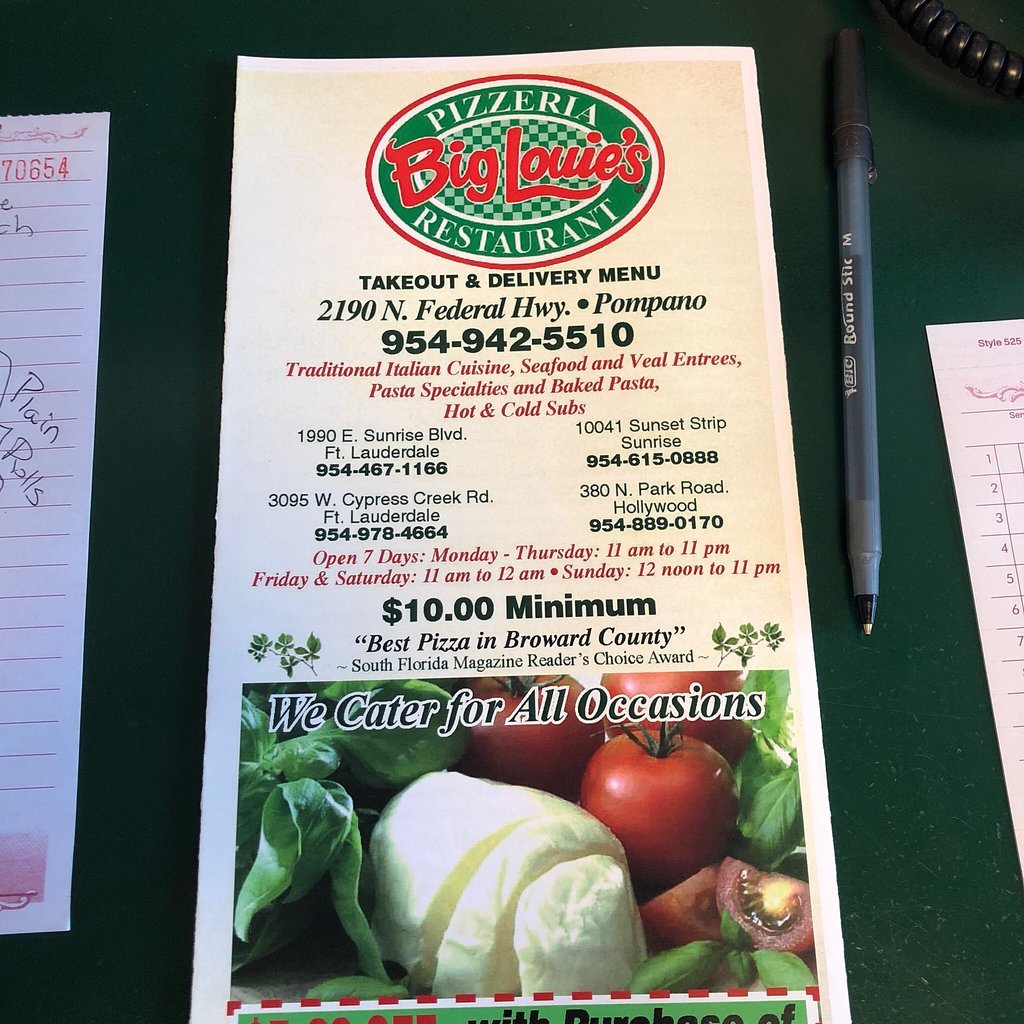 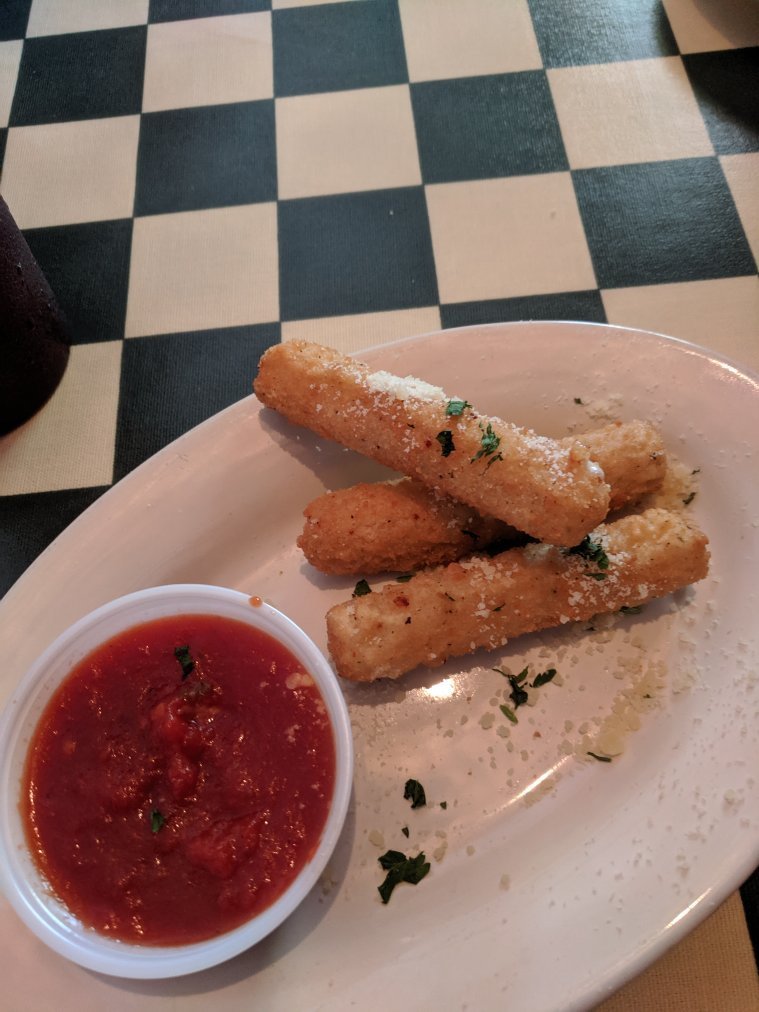 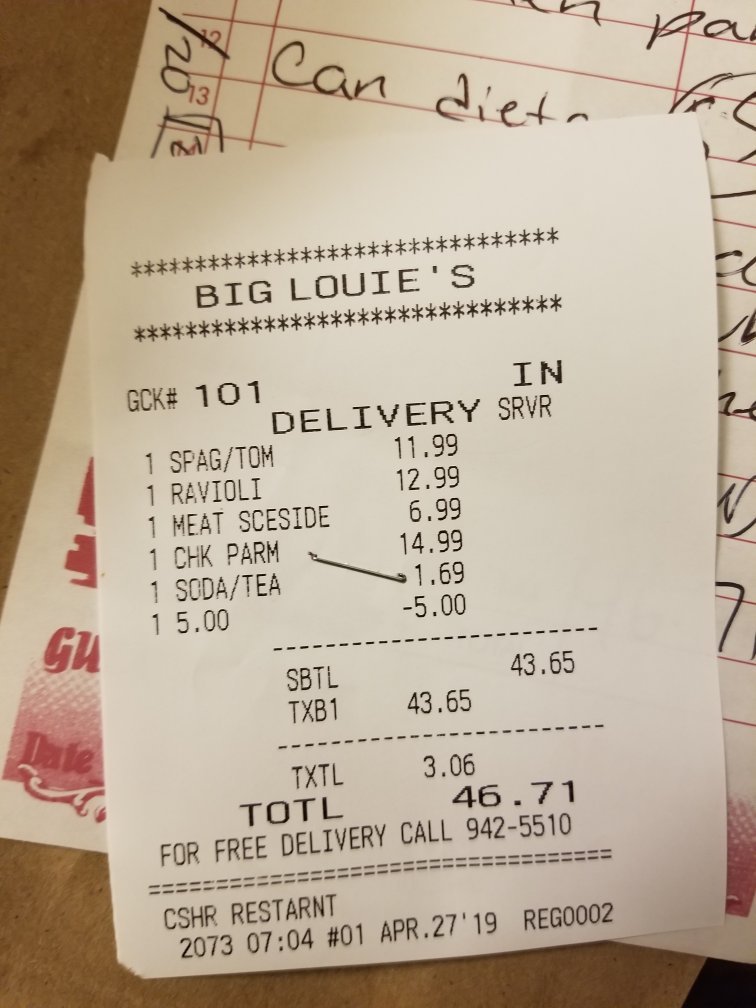 Do they sell by the slice?

Not sure. Always order a whole pie.

Do they deliver ??no Uber or doordash ?

Yes they do. Please call the LLP location or order online.

Really good! William is on the ball. Very busy and he was very professional. The place could use a good cleaning. The atmosphere has a lot to be desired. Cleaning the dusty vents and old stained ceiling tiles would help.we ordered a seafood pizza that was unbelievable!

Server great. Food ehh a bit thrown together. Definitely lacking TLC.. not like any other big louie's..

Food is consistently excellent, the staff is AWESOME. The dining experience is Stellar! Great place for takeout as well..

Amazing Italian food!! Garlic rolls alone are worth the trip. We come here every time we visit from IL!

Great selection of starters. And the pizza is almost perfect. They really do a nice job with simple items. A very friendly place.Great place for lunch.

We ordered some pizza for delivery. After the driver left and we opened the box, all the toppings had slid to one side. My daughter had already taken a slice and started eating it because she had already waited almost an hour. When I called the store to ask for a replacement I was told that if I already started eating it, I was out of luck! I asked for a manager to call me back and they never did. Customer service is dead at this place! The rudest people I have had the displeasure of dealing with.

$8 to have a plate - just wanted to give some spaghetti to my 7 year old son who was not hungry enough to order a huge meal...'sharing' charge. A little excessive i believe.

Got two pizzas delivered, but it took quite a while to get here. We opened up a box, and the cheese and sauce had slid over to one side of the pie because the driver likely wasn't being careful with the delivery. We had already started eating by the time we called to ask what could be done, and the person on the phone told us that since we'd started eating it, nothing could be done. After being hung up on, we called back, and the person who answered stated that there was no manager present but that we could leave a message and be contacted tomorrow. No surprise, but no call. Probably the worst service I've ever received from a pizza place.Definitely recommend one of the several other restaurants in the location.

Service was fantastic and the food was delicious.

Typical rustic Italian pizza place. Not a fan of pizza, but this place gets me every time. I keep going back just for it!

The transparent service and hospitality was beyond any expectations. The two lovely young women in the front actually were considerate enough to put a smile upon my face i desperately needed. From what i smell and what i have read ...... If the food is even a half as good as the service i would highly recommend this place to ANYBODY. Im from Jersey, finding quality pizza in south Florida is as akward as a fart during church!!!!

We eat here fairly often . We like everything about it, the food is delicious and the servers are extremely nice. Highly recommend it.

I loved eating here!! Such nice and fun staff! Our waiter was wonderful, and our pizza and entrees were delicious! The chef brought out the large pizza to my kids, dancing his way to our table for their entertainment. They loved it, so cute!

Read other reviews but didn't the their word. From the NY area so I know pizza will never be the same here. But its pretty good and worth another trip to. Service was very good, pizza and mozz stix better then expected. Garlic knots 👍🏻👍🏻Soda..... little pricey at almost $3 per on fountain. If it wasn't for that would have been very reasonable price. Inside reminds me of an old school Italian joint.Only negative was a couple loud mouth patrons that sous have been asked to leave causing a scene

The menu posted on this sight show an Eggplant Pharmazon appetizer that does not exist according to the staff. Big Loui might want to fix it.

A must for pizza and pasta, in Pompano Beach. Take out, delivery or eat in, can't go wrong. The dining room is large enough so not fighting to get a table, but cozy enough for a quiet, quaint experience. Wine and beer served along with great soup's salads and famous garlic rolls. Desserts and cappacino to finish the meal. Tell Naptali that Darin sent you.

would like to say good things because generally really like BIg Louies.Pizza Crust was thin and perfect but feel pretty cheated on toppings. Paid for a margarita pizza with mushrooms to go. When we got home, we had a regular cheese pizza.

Customer service was excellent! The pizza was delicious! I wish we had this pizzeria near me in NY. Thank you!

My family and I had the fettuccini alfredo, eggplant parmegiana and a small pizza. All of it was great and very well served. Our waiter William was very friendly and professional. He even boxed our food for us. Definitely going back!

Friendly staff and owner. Good food at good prices. Will be back

Our weekly go to for pasta and pizza.

Our go to place for all things Italian

The food was mediocre. But the staff and service was the worst experience I have ever had. The woman at the front was rude beyond words and obviously has no idea about customer service. I work in customer service myself and worked in restaurants for years and have never been treated or talked to the way that this woman spoke to me. Terrible experience and I would never suggest going here to anyone

Excellent place. Food was great and excellent staff. Marinara sauce was really delicious with meatballs. Definitely a repeater .Oh by the way the portions. Incredibly over the top.

The restaurant is amazing and broad, the menu was delightful and the rates were very economical. fast, efficient service and very attentive waiters. Will definitely recommend this spot.

I ordered stramboli calzone and i were more onions and peppers than mozarella cheese. By the way I ordered by UBER and I specified: no onions and no peppers, it was the first time and very bad experience

Great service, friendly servers and the food was pretty delish too! We had the Philly Cheesesteak Pizza, I will go back and try again, but will request alfredo sauce instead of their red sauce. Fried zucchini was sooooo good!!!

Cockroach in my pizza! Legs and antenna. Probably the grossest thing I have ever seen.

Would not fill our correct order. Rude staff when trying to reconcile items missing. Would not answer phone and ignored my calls. The worst!

We come here every time we're in town! It's one of our favorite places when visiting family. Great food and atmosphere. Can't wait to come back

Had a great experience in this place with my wife. The food arrived fast and the customer service is just fantastic. Prices are convenient.

This was one of the worst experiences I have ever had regarding food delivery ever. I ordered a calzone which is supposed to have ricotta cheese in it. Instead I got a calzone with mozzarella inside and no ricotta cheese. I called to let management now and see what could be done and they yelled at me and said they were putting me on a do not deliver list.I have never had an experience like this at any restaurant or food delivery service ever and I have never left a review online about anyting but I feel in this instance that the food service was that bad that I had to let people know. I would never recommend this place to anybody and I would eat at Pizza hut before I eat here again.

Service was good, spaghetti was not good very plain.

Horrible meal. Appetizer calamari was flavorless and chewy. My dinner was stuffed shells. The sauce tasted like it was from a can. No flavor. My husband's pasta was under cooked. They should be ashamed to say this is Italian.

This is a real gem! Homemade pizza and the best garlic knots! Our server made us feel like we were at home.

For an itain place they do not know how to drain water off pastA which turns the sauce into soup...the garlic rolls were like rocks...and the waiter stood in the middle of th dining room cursing

Great pizza they go the extra mile to please their customers!

First time there. Food was excellent. One of the best I have had since I lived in fla.. service was great and friendly. Will be back

Big Louie’s, big portions! Huge portions at great prices. All the food is delicious! Hands down the best pizza in South Florida.

Only tried a slice. Similar to NY pizza. Thumbs up!

Got two slices to-go, right before they close, amazing pizza and service, they got me for life, usually we go to Whole Foods for pizza, but wowawouwa! Tomorrow will repeat the process, highly recommend this spot.

My food and drink came out quickly. The drink was huge, sweet, and delicious. Super strong too! As for my food, wow. The salmon was perfectly cooked, and the mofongo was one of the best I have had. Mofongo typically dries out very quickly, as it is made with tostones. Usually it needs to be covered with some sort of sauce.

I went here for dinner one night as part of a group. Food was good and servers was attentive which made it a great place ro eat. We just had pizza and garlic rolls for the most part but it was good.

Ughh!! Probably the WORST Italian food I’ve ever tried. I couldn’t even finish my dinner it was so terrible. The calamari was rubbery, plain. No taste or texture at all. Linguine with clam sauce I tried you ask? Clam sauce tasted like it came out of a can. Watery, no taste at all. The linguine was half cooked, hard. Disgusting. Will never return here.

Your question has been sent.

Your review has been submitted.

Want to order over the phone?

Thank you for being with us!

We will call you back!